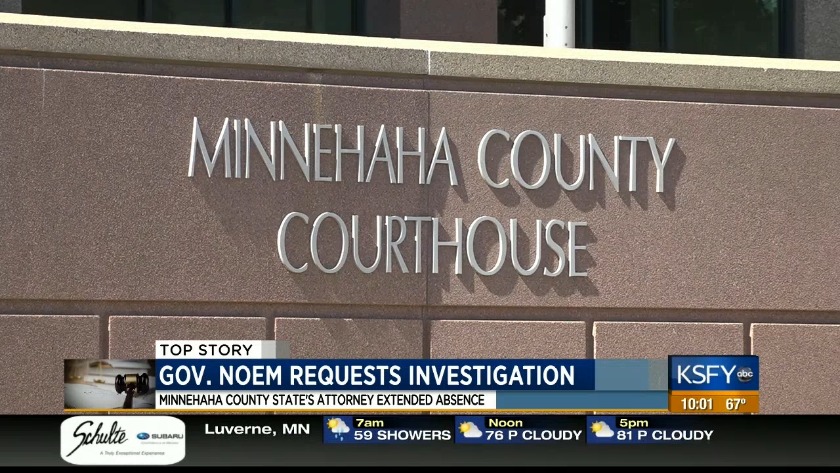 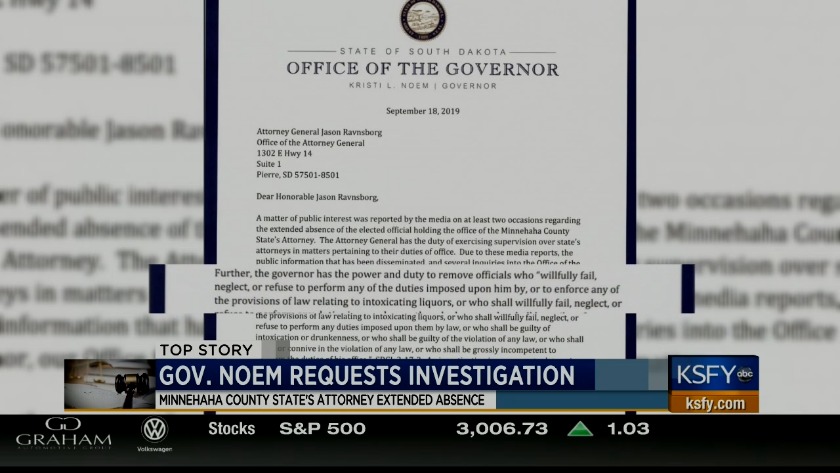 "A matter of public interest was reported by the media on at least two occasions regarding the extended absence of the elected official holding the office of the Minnehaha County State’s Attorney. The Attorney General has the duty of exercising supervision over state’s attorneys in matters pertaining to their duties of office. Due to these media reports, the public information that has been disseminated, and several inquiries into the Office of the Governor, our Office formally requests an investigation into this matter."

In closing, Noem added that this matter is of public interest and an investigation is necessary to determine if grounds for removal exist or not.

We spoke to Attorney General Jason Ravnsborg, he said the investigation will start immediately and that he's already been in touch with the DCI director.

When asked about a timeline. Ravnsborg said how long it takes depends on what they find.

You can read his statement in full here:

"I am in receipt of the governor's letter.

Pursuant to SDCL 1-11-10, and the other statutes concerned that the governor indicated, a formal investigation will begin immediately.

I have full confidence in the men and women of the Division of Criminal Investigation to gather the facts for me and I hope that everyone involved will be cooperative as we try to get answers for the governor and the public as soon as possible."

"It's not clear to me what exactly they're looking for other than some form of malfeasance of office, and I've heard of none of those, other than not being in the office," Dr. Card said. "We have telephones; we have many people working remotely; we have well-established mechanisms to supervise people who are working at a distance. But, then again, the investigation will determine those things."

When asked whether politicals could be playing a role in the investigation, Dr. Card says it certainly gives one pause to reflect if it is a political issue or not.

Governor Noem is asking the attorney general for a swift resolution saying this is a matter of public interest.