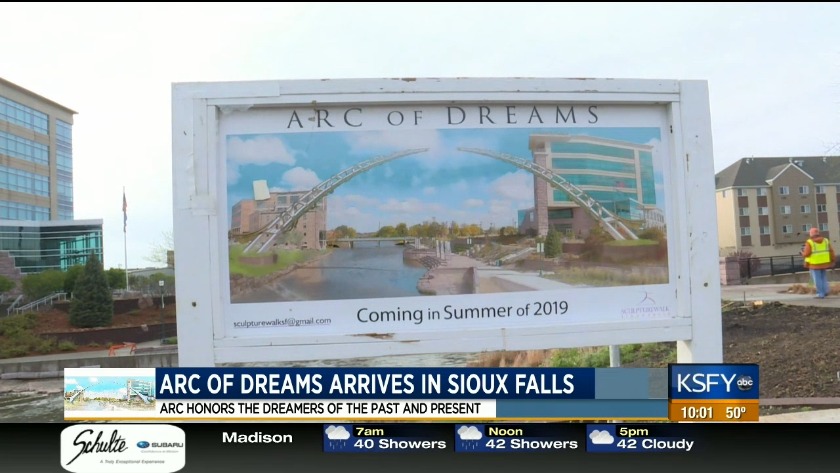 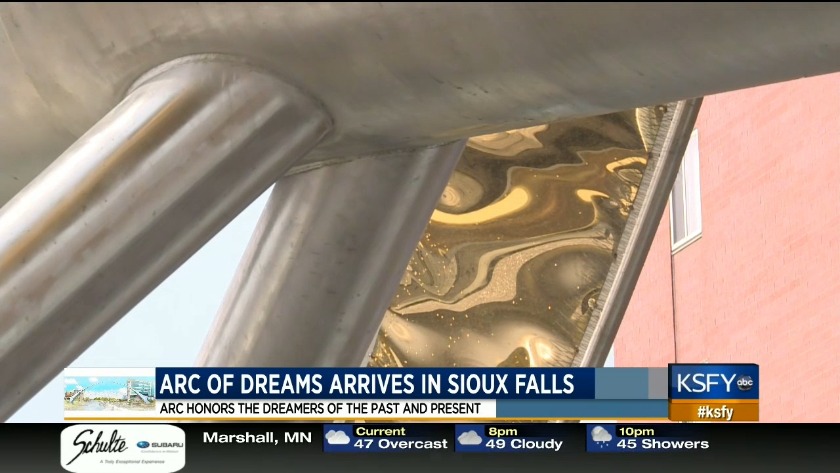 SIOUX FALLS, S.D. (KSFY) - The ‘Arc of Dreams’ made its way to its new home in downtown Sioux Falls Saturday morning after years of being constructed.

The new sculpture that will go over the Big Sioux River near Raven Industries will become the newest signature piece for the City of Sioux Falls.

"In fact I don't get goosebumps very often but I did when I saw it coming down the street," Sculpture Walk Director, Jim Clark said.

It’s been six years in the making. The ‘Arc of Dreams traveled all the way from Denver, to the artist Dale Lamphere's home and finally its reached its new home right over the Big Sioux River.

"We have a beautiful river and it's staging the land from Cherapa to Raven. It was donated by Raven and Cherapa and it's now going to be iconic for Sioux Falls," Sculpture Walk Board Member, Koni Schiller said.

The arc has been highly anticipated by those in Sioux Falls and the people who have been working hard on the Sculpture Walk team to get this art piece to Sioux Falls. They even had a champagne toast this Saturday morning to celebrate.

"I was crying, it's been six years we've been working on this and it's finally here and it's like we couldn't be happier and it's sort of like we gave birth today," Schiller said.

A massive baby! It’s a stainless steel sculpture that's nearly the length of a football field that will go 70 feet above the river. It took three large flatbed trucks to deliver the sculpture and that's just half of it.

"The gap is 18 feet it represents the leap of faith people have to take to achieve their dreams. Not only is it a beautiful sculpture but it pays tribute to dreamers of the past and present and we hope that it will inspire dreamers for generations to come," Clark said.

There were five designs before the final product was chosen. To make sure the design was safe to install wind tests had to be passed. Although it took those five times to get it right the last design was the group’s favorite.

This new piece of art has been anticipated by many and will help change the skyline of Sioux Falls.

"Of the people in Sioux Falls and I think all of our visitors will really like it and then also I think it's going to be iconic for the city," Clark said.
You can expect to see the ‘Arc of Dreams completely done by the end of June.

One person injured in high-speed chase in Lincoln County

One person injured in high-speed chase in Lincoln County