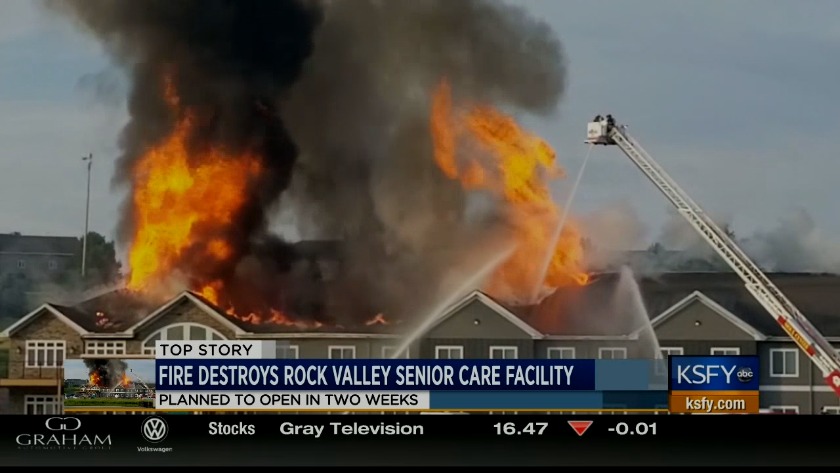 ROCK VALLEY, Iowa (KSFY) - Riverview Ridge Senior Living Center went up in flames at around 6 a.m. Tuesday morning, only two weeks away from its opening date.

Flames could be seen from the roof of the senior care facility.

Four different Iowa agencies were in Rock Valley to help battle the fire. Crews worked for several hours trying to contain the blaze and were only able to battle it from the outside since the smoke was so thick.

Fourteen of the nearly 40 rooms were already rented out. The facility is a project built from various donations from community members, making it the only senior care facility in the town other than a few rooms at the local hospital.

Todd Van Tol is the board president of the Rock Valley assistant living facility.

He was in disbelief Tuesday morning.

"It was hard," Van Tol said. "We've been working on it for a couple of years. And yeah, it was hard to see it burning."

KSFY News was told a few residents were already in the process of bringing their belongings into the facility and sold their homes in anticipation for that July 22 grand opening.

The fire broke out at RiverView Ridge Ridge Senior Living around 6 a.m. Tuesday.

RiverView Ridge Senior Living board member Jim VanderVelde tells KSFY News no one was living at the complex at the time of the fire. The facility was scheduled to open in two weeks.

"It's really sad, very sad," VanderVelde said. "It was a beautiful building."

Fire crews appear to have knocked down all the flames by 9 a.m., though several firefighters remain at the scene to monitor hot spots.

Firefighters confirmed no one was hurt in the fire.

Roughly 60 firefighters from four area fire departments took part in battling the fire. Rock Valley fire chief Brent Ushuis said it was one of the largest fires in the community's history.

The cause of the fire is still unknown. VanderVelde said construction crews were working until 8 p.m. Monday as they worked to finish the project.

Crews had just recently installed the sprinkler system. VanderVelde said it was set to get activated Tuesday.

RiverView Ridge Senior Living had been a community-sponsored project years in the making. Construction on the 39-unit facility began a year and a half ago. VanderVelde said some residents had already sold their homes in anticipation of moving into the facility.

No one hurt in Mitchell garage fire

No one hurt in Mitchell garage fire