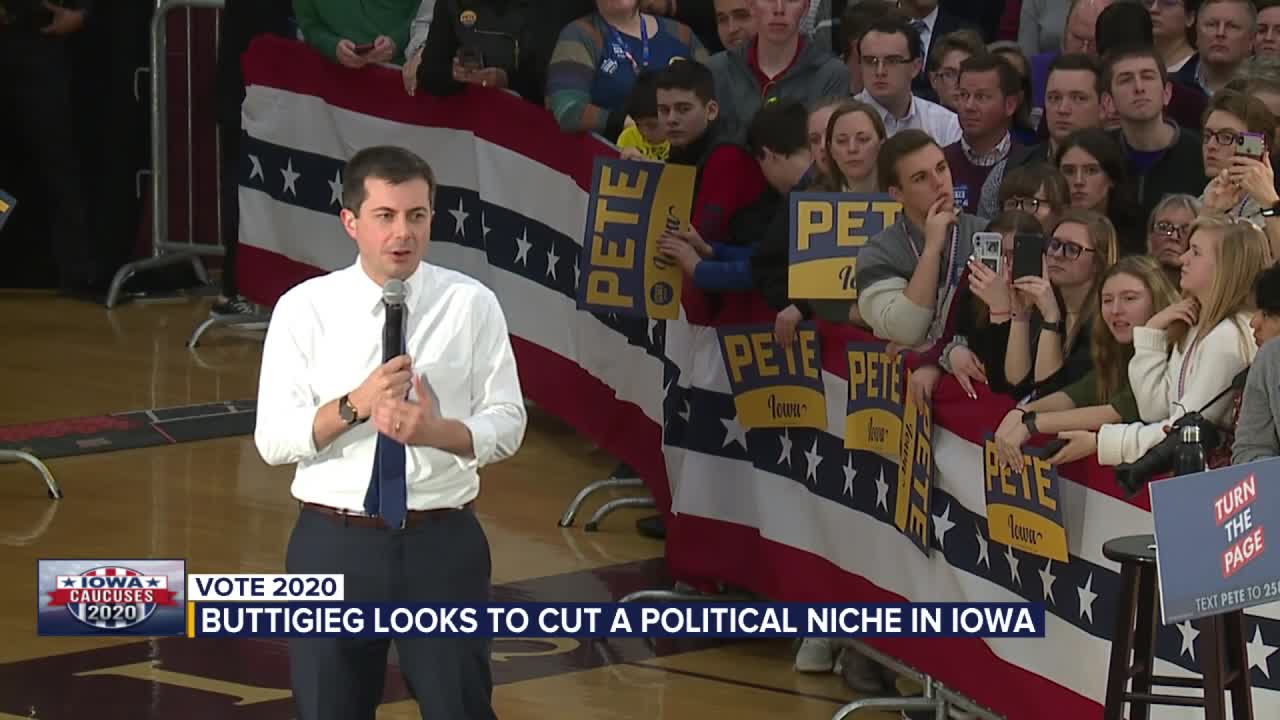 Buttigieg looks to cut a political niche in Iowa 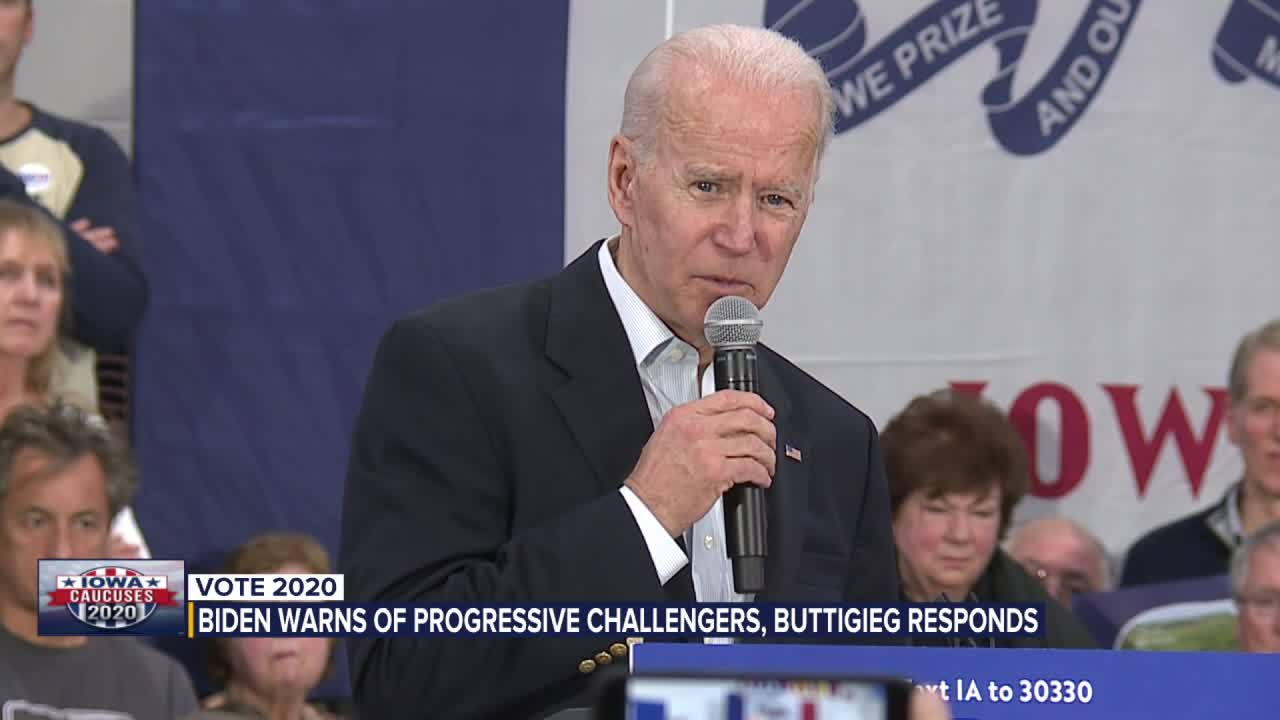 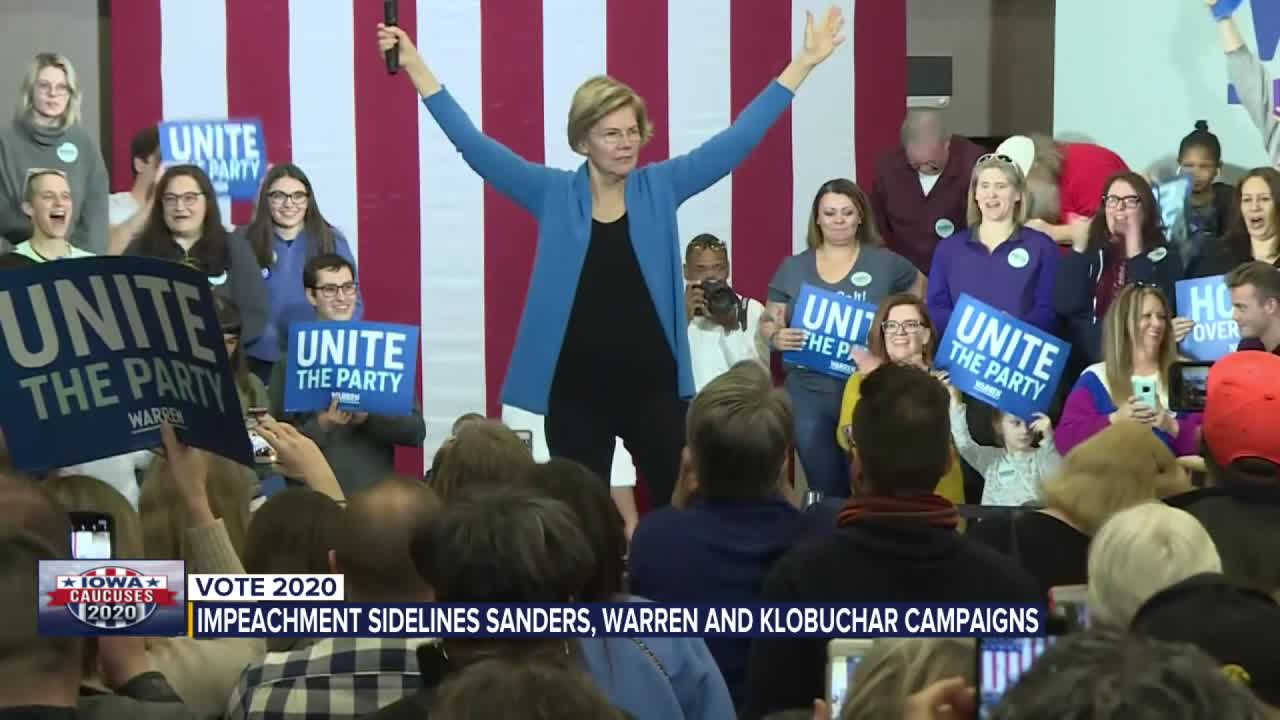 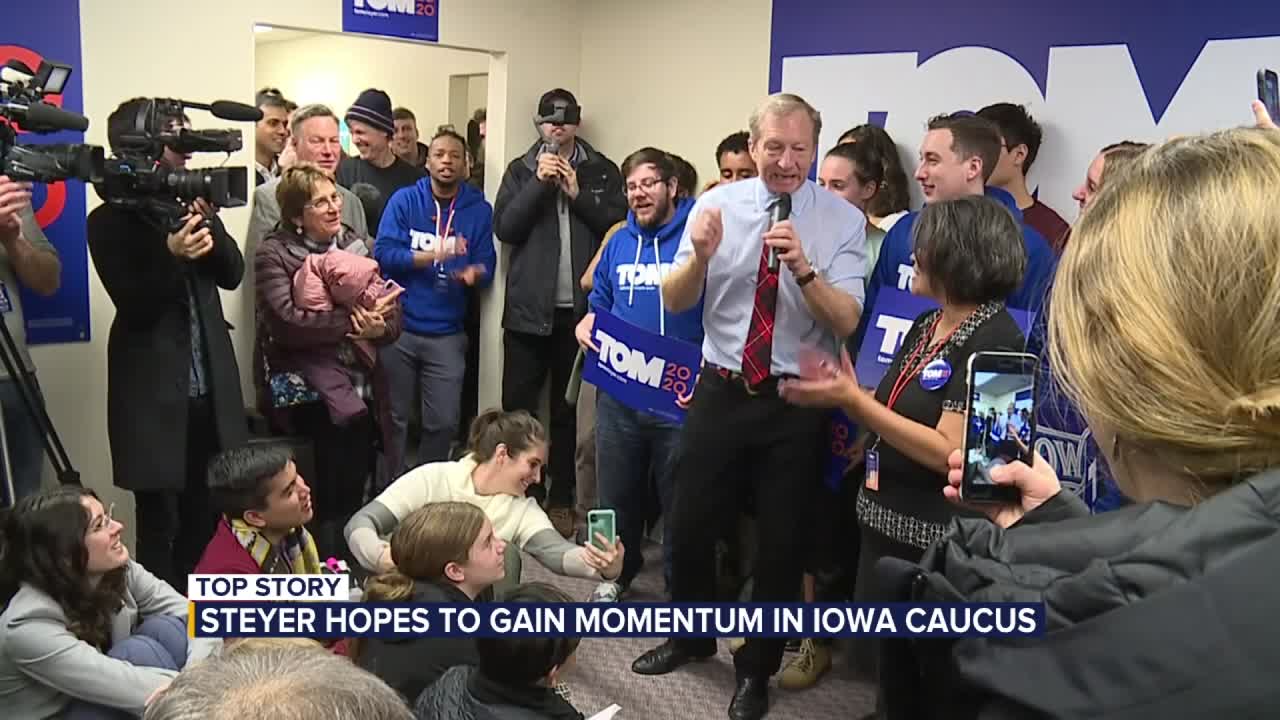 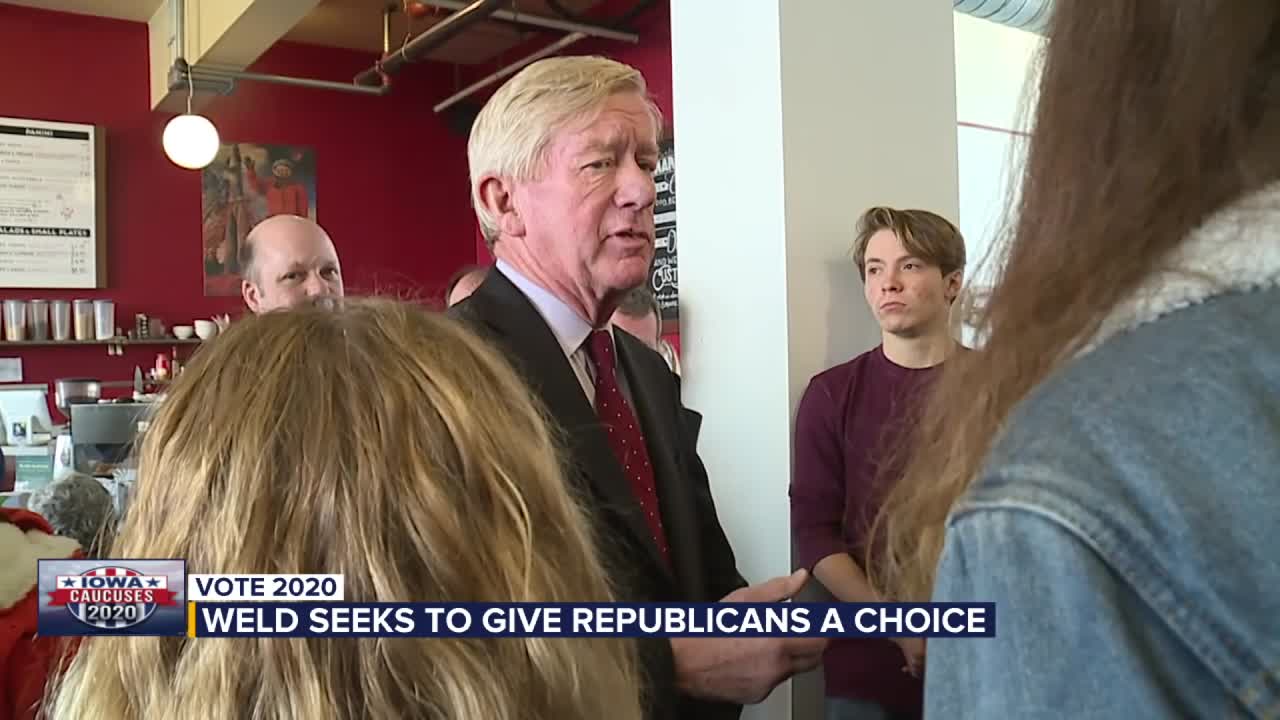 William Weld hopes to give Republicans a choice

DES MOINES, I.A. (Dakota News Now) - Schools, churches, and other gathering places all across Iowa are beginning the process of thinning out the field of presidential candidates.

In most cases, those campaigns have been at work in the Hawkeye state for more than a year.
The Iowa Caucus results will determine which campaigns have the early lead when it comes to vote of confidence.

Pete Buttigieg is 38 years old and is the former mayor of South Bend, Indiana. He has not held any elected position at the federal level.

According to most polls, he is running third in the Iowa Caucus. Proving to be a strong challenger to a former vice president and to sit in the United States senators.

“We’ve got to make sure we deliver an economy that values work over wealth and protects workers, whether you’re a gig worker, a contractor, or an employee, we’ve got to make work pay in the United States of America,” said Buttigieg.

For close to a year now Pete Buttigieg has been making the argument to Iowa voters. That his experience as the mayor of South Bend, Indiana is enough to give him political credibility in the 2020 presidential race.

While he may have had some early detractors it is hard to ignore his standings in the polls and the turnout at events like this at Lincoln High School in Des Moines. Where Buttigieg openly challenged evangelical conservative voters who have tried to dismiss him.

“We are ready to let the message go far and wide to voters of faith, that while this country belongs equally to people of every religion and of no religion, it is also okay as a person of faith to realize you’ve got a choice and insist that God does not belong to a political party,” said Buttigieg.

Buttigieg asks his rock-ribbed supporters and those who may be simply considering him to not view this election as the simple task of casting a vote. Buttigieg says political decision now must be made on a more personal basis. Including the Iowa Caucus.

“Traveling across Iowa, traveling across the United States of America speaking to the people impacted by these choices we’re about to make, it’s that all politics is not only local it is personal for each of us in a different way,” said Buttigieg.

In the final hours, until the caucuses began, two of the top-tier Democrats in the race have been making their case to voters about political ideology and experience.

This past weekend Biden urged Iowa voters to not go the progressive route.

On the campaign trail at events all across Iowa, former Vice President Joe Biden is making clear that he believes the 2020 presidential race is about his ability to fix what he says President Trump has broken.

But what Biden is also making clear through stump speeches and through television advertising is the idea that in his words this is no time to take a risk. A political jab at left-leaning candidates Bernie Sanders, Elizabeth Warren, and Pete Buttigieg. Biden has questioned all three and their plans on everything from providing free college to redesigning the nation’s healthcare system. This weekend in Des Moines, Buttigieg tackled Biden's claim head-on, saying a significant change is necessary at the top if the United States is to have significant change overall.

Speaking of Bernie Sanders and Elizabeth Warren, they along with Minnesota Senator Amy Klobuchar have been significantly sidelined from the campaign trail over the last several weeks as a result of the impeachment trial in Washington.

A recent poll in averages shows Bernie Sanders holding the lead in the democratic race for president in Iowa. But as of late he has had to do most of his campaigning on Saturdays and Sundays while the Senate has been overseeing the impeachment trial. Sanders made a stop in Newton, Iowa on Sunday.

In eastern Iowa city of Davenport Senator Elizabeth Warren held a town hall meeting. She told her supporters that the caucus must be about moving the Democratic Party forward.

“I understand that during primaries people can get heated but what’s important is that we come together as a party because we have a one really important job and that is to beat Donald Trump. And our best chance to do that is when Democrats work together we go out there and fight for the things we believe in and we bring as many people as possible into our party,” said Warren.

It's been a tough message for Warren to deliver consistently though. Her in-person appearances have dwindled as of late because of the impeachment trial. In recent days Warren has held Town hall meetings over speakerphone in an effort to connect with voters.

A video from Sunday shows Amy Klobuchar attending a Super Bowl party and speaking with supporters during halftime. After that speech, she flew back to Washington and was in the Senate on Tuesday. She says running back-and-forth between the nation’s capital and Iowa has been tough.

“It is what it is. I’ve got a constitutional duty to be here, I said that from the beginning. I’m a mom, I can do two things at once and so I’ll be headed back to Iowa,” said Klobuchar.

With impeachment proceedings in Washington expected to last through at least Wednesday, if not further, it seems impeachment could also partially sideline Sanders, Warren, and Klobuchar and their efforts to campaign in New Hampshire. That state's primary comes up on February 11.

One of the late entries into the democratic race for the White House is businessman Tom Steyer.

According to polling averages compiled by real clear politics, Steyer is currently running seventh in Iowa with 3% support.

Nonetheless, he told me earlier Tuesday that he is confident Iowa will give him momentum to build a stronger campaign.

It was an early morning at Tom Steyer campaign headquarters on Ingersoll Avenue in Des Moines. Supporters and media packed themselves into a meeting room as the Democratic candidate said the results of the Iowa Caucus will be a defining moment for his campaign and propel his message of addressing climate change.

“We’re in a position where we have to move away from fossil fuels. I’m going to declare a state of emergency on day one because we’re in a climate crisis and we need to get going” said Steyer.

Steyer has spent a lot of time in the state and has also spent a lot of money on television and radio advertising. But he has had trouble breaking through into the upper echelon of Democratic candidates. He currently polls at an average of 3% support. So I asked Steyer how he will define success if the results come in and don't turn his way.

“Look, if we beat expectations tonight and come out of Iowa with momentum that will be a success. It’s a long race, that’s what I have to do today and that’s what I’m going to do,” said Steyer.

Steyer faces a tough road in Iowa and New Hampshire where he is currently pulling eighth. His political fortunes are better in Nevada where he is running fourth and South Carolina where he is third.

While much of the discussion surrounding the Iowa Caucus has to do with Democratic presidential candidates, there is a Republican in the race as well that is challenging President Trump for the Republican Party nomination.

William Weld is the former Republican Governor of the state of Massachusetts and is known as a moderate.

In 2016 he was the Libertarian party's candidate for Vice President. He says he is challenging President Trump and the Republican primary process because of the damage Weld says the president has inflicted on the country.

The Mars Café near the campus of Drake University in Des Moines isn't known for this kind of activity before 10 in the morning. But what had casual café goers and Drake students lining up was a chance to speak with a presidential candidate.

Weld tells me he believes Trump should be removed from office for his handling of the Ukraine situation. Weld says should the president be re-elected in November, it will mean dire things for the country.

While William weld is hoping to gain some traction in the Iowa Caucuses among the four democratic front runners, Tuesday’s results are crucial.