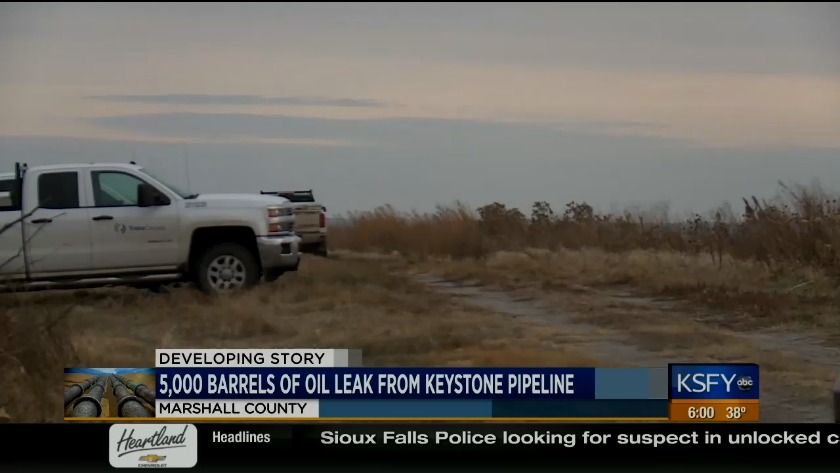 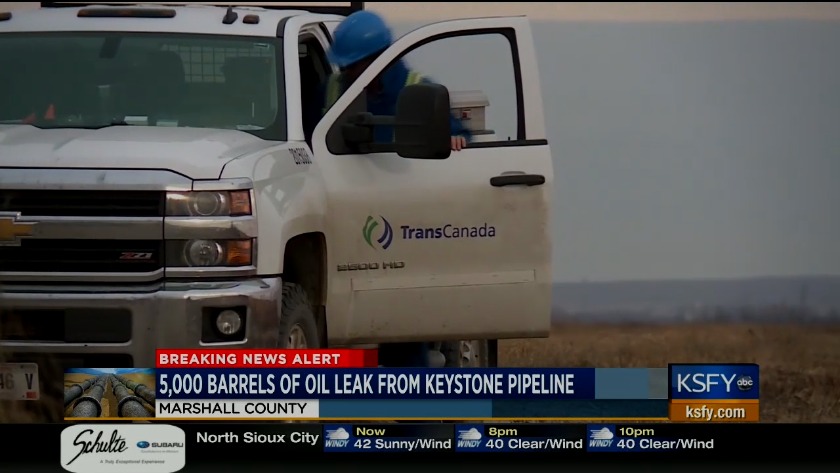 AMHERST, S.D. (KSFY) - Crews are working to clean up a pipeline leak that has spilled at least 210,000 gallons of oil in South Dakota.

Brian Walsh with the Department of Environment and Natural Resources tells KSFY News they were alerted to the leak at 10:30 a.m. Thursday morning by TransCanada.

The leak was in the Keystone Pipeline located in an agricultural area in Marshall County. There have been no reports of the oil entering any waterways or water systems at this time.

The pipeline has been shut off and the leak has been covered. An emergency response plan has been activated to get more staff and contractors to the site for clean up.

Walsh anticipates the clean up will take some time.

The following is a statement from TransCanada in response to the oil leak:

"TransCanada (TSX, NYSE: TRP) crews safely shut down its Keystone pipeline at approximately 6 a.m. CST (5 a.m. MST) after a drop in pressure was detected in its operating system resulting from an oil leak that is under investigation. The estimated volume of the leak is approximately 5,000 barrels. The section of pipe along a right-of-way approximately 35 miles (56 kilometres) south of the Ludden pump station in Marshall County, South Dakota was completely isolated within 15 minutes and emergency response procedures were activated.

Crews, including TransCanada specialists from emergency management, engineering, environmental management and safety as well as contracted, nationally recognized experts are assessing the situation. TransCanada is providing State and Federal regulators, including the Pipelines and Hazardous Materials Safety Administration (PHMSA) and the National Response Center (NRC), with accurate and confirmed information on an ongoing basis.

TransCanada appreciates the collaborative support of local officials, emergency response personnel and commissioners in Marshall County, as well as the landowner who has given permission to access land for assessment, identification and clean-up activities.

We have been keeping our shippers and customers up to date and have communicated that the pipeline from Hardisty, Alberta to Cushing, Oklahoma and to Wood River/Patoka, Illinois is expected to remain shut down as we respond to this incident. This does not affect the Marketlink pipeline system, which uses the facilities of the southern leg of the Keystone system from Cushing to the Gulf Coast.

The safety of the public and environment are our top priorities and we will continue to provide updates as they become available."

GIVEAWAY: Which PBR Rider are you?

Hundreds of people catch over 1,000 fish at Ice Fish Fest

GIVEAWAY: Which PBR Rider are you?

Hundreds of people catch over 1,000 fish at Ice Fish Fest