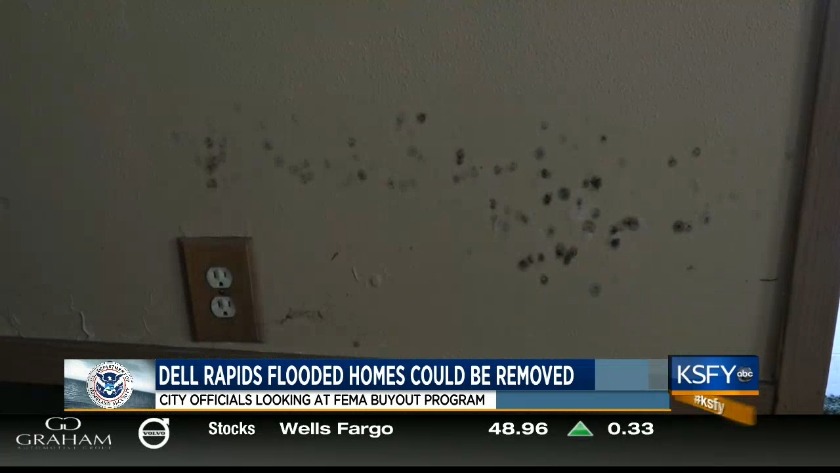 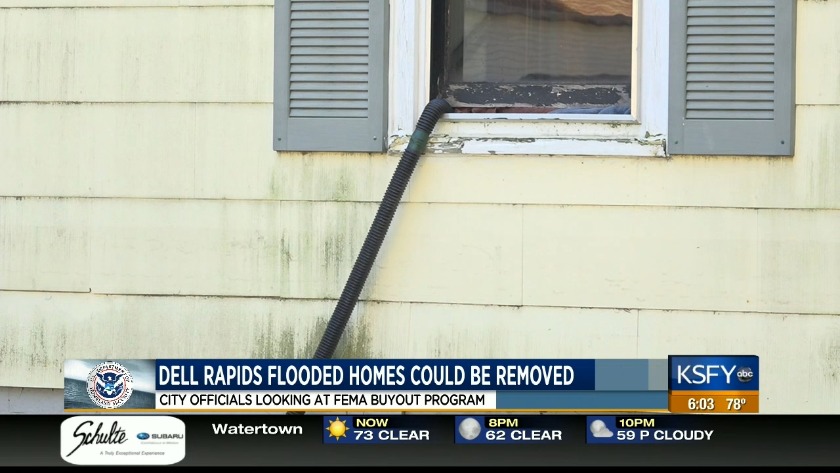 DELL RAPIDS, S.D. (KSFY) - Upwards of a dozen homes were destroyed after record-breaking flooding from the Big Sioux River that took over the south side of Dell Rapids.

Now city officials are assessing the damage to see if the damaged homes in the neighborhood need to be removed.

After the flooding, there is no way some of the homes will be livable again. That's why city officials are considering the FEMA Buyout Program that would remove the homes in this area, but this could be a yearlong process.

"Five o'clock Thursday morning we actually heard our neighbor to the south fire up his lawnmower and we were like what the heck! What's Rick doing now?" Dell Rapids resident, Kelly Tiernan said.

Rick was moving his lawnmower and cars away from the water that was quickly approaching. Just more than a week later homes that were in the river's way have substantial damage.

Now that renters and homeowners are back in their homes cleaning up City Administrator Justin Weiland is coming up with a plan to start assessing the damage.

"Every home that received damage needs to have a damage assessment. FEMA has a rule of substantial damage,” Weiland said.

If the damage exceeds 50 percent of the property value then those homes are deemed substantially damaged. That follows the guidelines placed by the Federal Emergency Management Agency.

"We realize that this is very difficult for homeowners and we're going to be working with them through this process," Weiland said.

Kelly Tiernan received eight inches of water in his home. Now they're cleaning up and moving on.

The water was right up to the bottom of his fireplace, but it didn't overtake the whole fireplace.

The family only rented the home, but their landlord has three options; tear the home down, move the home to a different location outside of the flood plain or elevate it.

If demolition is chosen the property owner would go through the FEMA Buyout Program.

"The FEMA Buyout Program purchases the homes at 75 percent of an appraised value," Weiland said.

The process can take months. If the homeowner decides to take that route they will be responsible for removing the structure and filling any holes left behind. They will get a 75 percent reimbursement for the costs associated with the cost of tearing down the home.

Dell Rapids City Council will be meeting Monday, October 7 at 7:30 p.m. to start planning the next steps.