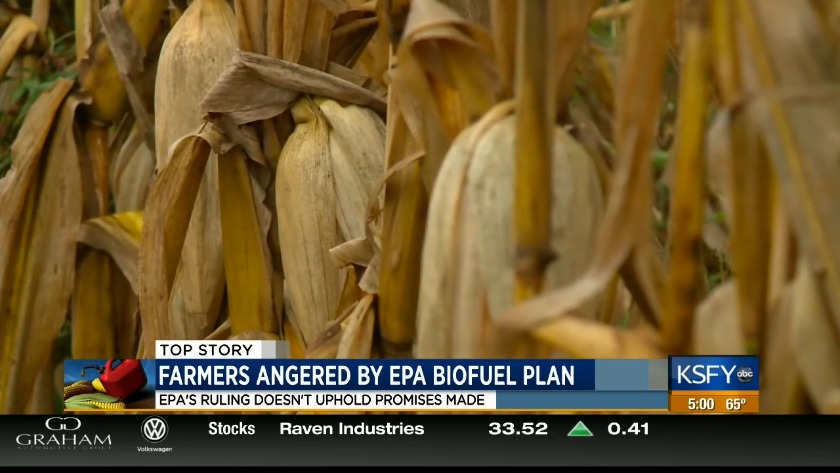 SOUTH DAKOTA (KSFY) - Earlier this month lawmakers came to an agreement with the White House to require 15 billion gallons of ethanol to be blended, but Tuesday, the Environmental Protection Agency (EPA) released a proposal that does not meet what the Trump administration promised.

Earlier this month the EPA said it would take actions to ensure those 15 billion gallons of ethanol would be used, but as of right now that's not happening.

South Dakota farmers are frustrated with how the EPA is handling a Trump administration plan to boost the ethanol market. Many were cautiously optimistic when they heard a new deal was coming.

"It's really getting frustrating that they'll tell you one thing and then they'll go and do another and hope people don't catch some of the details," Corn farmer, Keith Alverson said.

After pressure from lawmakers and producers of ethanol, they were happy with the deal to add 1.3 billion gallons of waived ethanol back into the fuel supply.

"It’s important that we follow the law. The law calls for 15 billion gallons and we want to make sure that the new rule incorporates that," South Dakota Senator John Thune said.

But the EPA proposal released on Tuesday uses a different calculation that biofuel groups say would only replace 770 million gallons falling short of the original plan.

"The president will come in and he'll get the congratulations and then the EPA will go do their thing and it'll change things. So ultimately the buck stops with him," Alverson said.

It’s creating hardships on the ethanol plants and ultimately all the way back down to the farmer. POET said in a statement that this new rule is a nonstarter and lacks certainty to provide relief to farm families and South Dakota’s rural economy.

"I’ve got one ethanol plant shut down. Two of them are slowed down to half capacity," Alverson said.

Lisa Richardson with South Dakota Corn said the EPA isn't thinking about the effects this will have on agricultural states.

"They're listening to oil. Candidly the EPA is listening to oil," Richardson said. "At the end of the day, the EPA didn't keep their commitment to the corn farmers across this country to restore the integrity of the Renewable Fuel Standard."

Richardson added that right now 2,700 people have been laid off due to the waivers the EPA granted to the oil industry. Congressman Dusty Johnson says he thought this new deal was a win for farmers earlier this month.

Now he's saying, "The EPA’s proposed RFS rule does not deliver what was promised. Earlier this year he introduced the RFS Integrity Act along with Representative Peterson to provide certainty and close the waiver loophole. Our bill looks better every day," Johnson said.

South Dakota officials and farmers are holding the Trump administration to their original promise and are expecting the EPA to follow their lead.

Portion of JBS meatpacking plant in Worthington to reopen Wednesday

Portion of JBS meatpacking plant in Worthington to reopen Wednesday