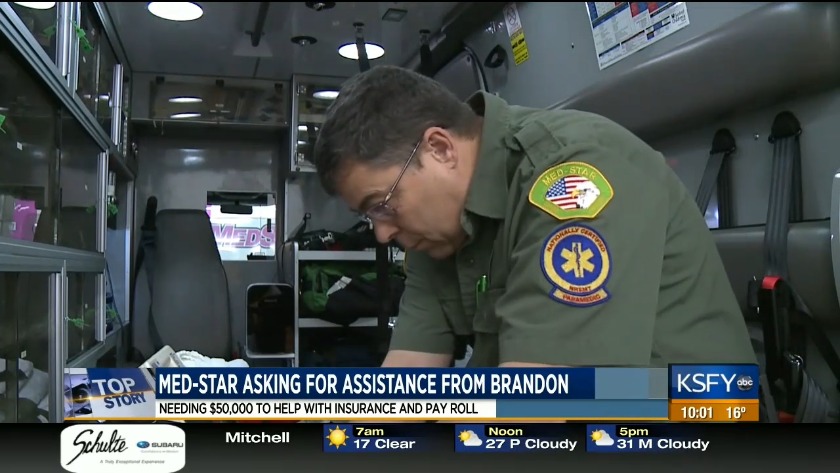 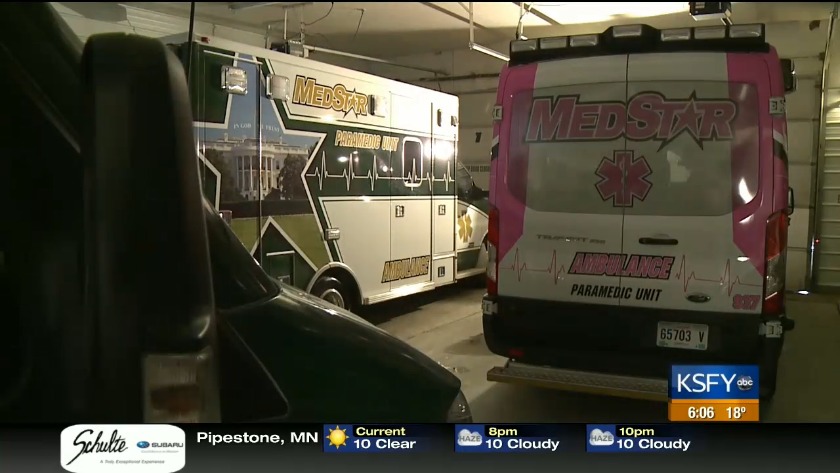 MED-STAR asking for assistance from Brandon

SIOUX FALLS, S.D. (KSFY) - Not having emergency services would be a problem for any community. MED-Star Ambulance has been serving the community of Brandon since 2007 providing paramedic services.

And now business owners are asking the city for $50,000 they said it needs to continue providing Brandon with those much-needed services.

MED-Star has reached out to the city council of Brandon to help take the edge off some of the expenses the business is covering.
Jay Masur has fought hard for MED-Star to be in the 911 service, but his business is losing money faster than its being made.

MED-Star is in need of financial assistance to keep it going.

"As of today, we're unclear if we're going to get the support from the county and or the city that we're requesting to keep services at the level that they currently are. You know we've got probably the best response times in the country," MED-Star CEO, Jay Masur said.

Masur said there was a 5-1 in support of helping the service and he said during the second hearing council members voted 4-2 against providing assistance.

"It is disappointing we've given our whole beings to this city to provide services and to be there for the residents," Masur said.

After the vote not approving MED-Star to receive $50,000 Bryan Read said...

"The council is committed to working with MED-Star to resolve the situation and assist them if we can," Brandon City Administrator, Bryan Read said.

The Brandon City Council doesn't want to fund a for profit ambulance service. Masur said they're not making a profit right now and they're at a deficit of $400,000 a year.

“Our reimbursements have gone down as our costs have gone up. My wife and I and our family have always supported we've always taken our money from our other businesses and put it into the 911 system so we'd have a fast efficient transport time,” Masur said.

Masur said that every second counts when dealing with people who need medical attention.

“But there's nothing free in this world and every second you add to a response time cost money and our three to four minute average response time in the city of Brandon and eight minutes or nine minutes out in the county that all cost something and it costs my family dearly,” Masur said.

Some in the Brandon area worry if MED-Star doesn't serve the community they'll have to use Sioux Falls ambulance services which means longer response times. City councilman Timothy Wakefield JR. is one of the only city council members who has talked with Masur.

“The goal in the end is to make sure that we have paramedics that can respond to our residents homes in three minutes that’s the goal in my opinion. At this point we need to protect what we have because we don't know what we can get and I don't have any understanding of what it would take to get ambulance service into Brandon,” Brandon City Councilman Timothy Wakefield JR. said.

“What I’m struggling with the most of this is we're willing to spend $100,000 remodeling a park or putting a rubber mat on a park but yet we're not willing to dedicate money towards something like an ambulance service in our community.” Wakefield said.

City Administrator Bryan Read tells me that they have a small committee working on this and hopefully they'll have a recommendation for the city council at the next meeting.

The Brandon city council will meet in two weeks and med-star will hopefully have an answer.