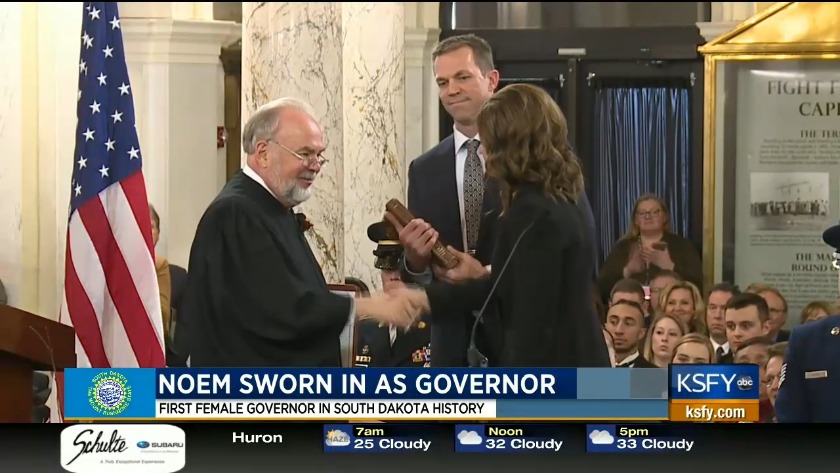 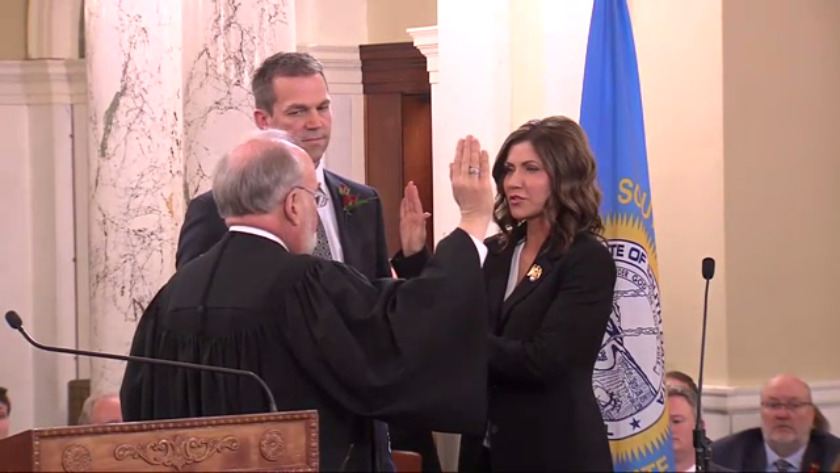 Noem was sworn in to office Saturday, becoming the first woman to serve as South Dakota's governor. Noem says the milestone is a "distinct honor."

U.S. Sen. John Thune, who served with Noem in South Dakota's federal delegation, says it's "an exciting day and a historic day" that all residents should celebrate.

Borglum was among legislators and other officials who took their oaths of office on Saturday. The number of women who will serve in the South Dakota Legislature in the upcoming 2019 session is close to a record high.

Borglum called it "tremendously exciting," saying the Legislature needs a variety of perspectives. Borglum says she's proud her first full session is with Noem as governor.

Noem took her oath of office Saturday. In her inaugural address, Noem said she couldn't let the day pass without commenting on its "historic nature."

Noem's election to her first term as governor in November came 100 years and one day after women's suffrage passed in South Dakota.

Noem says she didn't campaign on gender, but she says the milestone is an honor, foremost because of the message it sends to children in South Dakota that anything is possible. Noem says she wants to be governor for the next generation.

Noem is the state's 33rd governor.

Kristi Noem has officially taken the oath of office to become the governor of South Dakota.

Noem is the 33rd governor of South Dakota, and the first woman to ever hold the office.

Noem will be sworn in Saturday at the state Capitol in Pierre. After taking her oath of office, Noem will give an inaugural address.

A spokeswoman says Noem is set to discuss her plan to tackle the challenges ahead for South Dakota's next generation. The ceremony and a receiving line afterward are free and open to the public.

A ball in the Capitol rotunda and another at a Pierre event center will cap the celebration. The estimated budget of $150,000 is funded by donations and ticket sales.

State legislators and other officials will also be sworn in Saturday.

Noem will be the 33rd governor of South Dakota. She replaces retiring Republican Gov. Dennis Daugaard.

(The Associated Press contributed to this report. Live coverage is provided by pool feed from the South Dakota Broadcasting Association & SDPB)

The South Dakota National Guard Color Guard presents the American flag at the beginning of the inauguration.