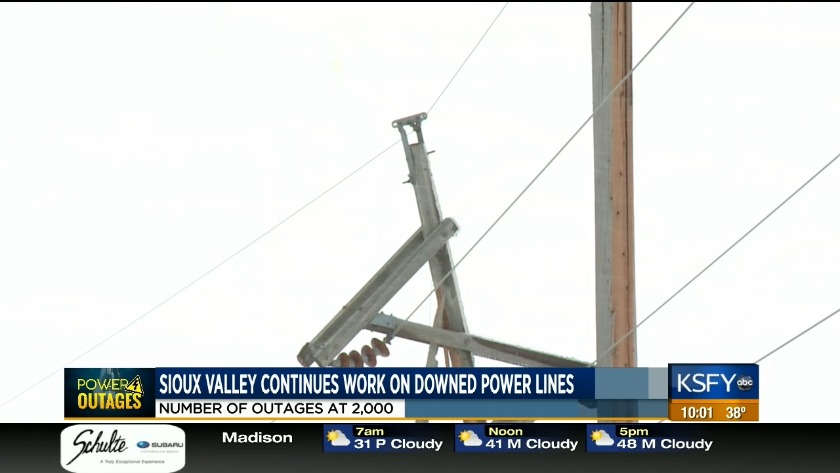 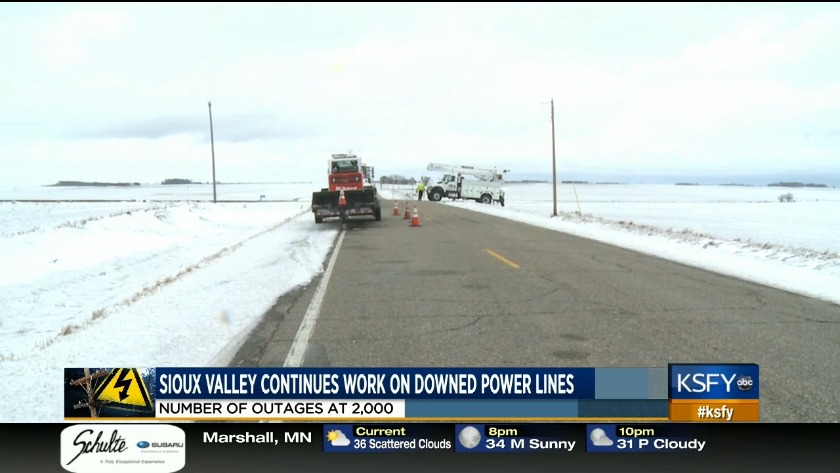 SIOUX FALLS, S.D. (KSFY) - Crews for Sioux Valley Energy continue to work on restoring power to thousands of customers. The number of outages have dropped from nearly 10,000 on Thursday to around 1,400 Sunday.

The past few days have been hard for many people between snow and rain. All of that has caused major power outages in the area and crews from many companies are working long hours to get it restored.

122 people are working in the field today from 14 different companies to help Sioux Valley Energy restore power to nearly 2,000 homes.

"I will say right now we're building a lot of temporary lines out there just to try and get our members on as fast as we can. We're going to have months of clean up after this storm it’s pretty much decimated our entire service area. We've got about 6,000 sqaure miles of service territory at about 2,500 miles of that is damaged right now," Sioux Valley Energy CEO, Tim McCarthy said.

The biggest issues they're facing right now is the weather conditions. They have around 580 broken poles and a lot of down wire.

"Once you get that condition and you've got all that weight on the equipment then followed by that wind it's very easy for a lot of facilities to get damaged in conditions like that," McCarthy said.

Terry Ebright is the safety coordinator at Sioux Valley Energy and has experience working out on the lines so he knows what those long days are like.

"You’re out there and you're working 16 hours a day that get to be long days and it has a tendency to wear on you and wear your body down so you have to keep your mind in the game," Ebright said.

If you're seeing trucks passing your homes and you don’t have power the CEO said don’t worry. They’re working on places right now that will provide power to many areas rather than just a few.

One thing Sioux Valley Energy would like to ask is that you stay aware of the trucks that are stationed on the streets while crews are working to restore power.

Largest solar project in the State announced at the Capitol

President's windmill hatred is a worry for booming industry

Largest solar project in the State announced at the Capitol

President's windmill hatred is a worry for booming industry